Treasure hunting is a fun way to try and win UPX or spark*. Hunting requires you to send your block explorer to different properties around a city based on hints to get in close proximity of the treasure in order to claim it. If you have never treasure hunted before, you should understand these basic things about treasure hunting before continuing reading this page. It is important to note that as you begin hunting for treasures you should expect to lose more UPX than you will win. Treasure hunting is a skill and just like most skills, they require practice. In the long run if you are able to master the skill, it can be very profitable.

*Note that in order to participate in exclusive and rare hunts and collect spark through treasure hunting you are required to verify your identity with the KYC process (know your customer). Learn more about that here.

In addition to the regular treasure hunts, during Spark Week, Upland has special treasure hunts where all the treasures found include spark. Learn more here about spark week.

The most important thing to learn about treasure hunts are the hints. As you can see based on the hints, even being within 50 meters of a treasure is not enough to claim it!

There are 4 different types of main treasure hunts, increasing in difficulty, and therefore the rewards are also higher. Sparked up treasure hunts exist only during a few days within spark week. Through the dynamic treasuring hunting schedule competitive treasure hunts are not available in all cities simultaneously. On a weekly basis the cities that have competitive hunts available changes. Stay tuned to Upland’s announcements to know where you can hunt.

Standard hunts are the only type where you do not complete against other players - only the clock. You get one free standard treasure hunt each 24 hour period, but you can complete more (theoretically infinite - more on that later) for paying a small fee (50-125 UPX, depending on the city) for each hunt. You are given 5 minutes to find the treasure. Click a property close to your block explorer and then the treasure hunt button within the property card. This will reveal you the hint. Based on that hint, send your block explorer to another property to reveal the hint there, in the hopes that the hints indicate that you are getting closer to the treasure. Repeat this process until you find the treasure, run out of sends, run out of time, or give up.

Depending on the city you are in you can only use a maximum of approximately 40 sends each 24 hour period. When treasure hunting or for any other reason, sending your block explorer to a property you own does not result in the loss of a send. Therefore the more properties you own in a city that are strategically spread out will decrease the sends you must make to properties that you don't own. This means that in theory, the more properties you have also result in your ability to treasure hunt for a longer period of time before you reach the maximum number of daily sends. If you never have to send yourself to a property not owned by you, you could hunt forever.

To create a good network of properties for the purpose of standard treasure hunting, it is recommended to own anywhere from 10-20 properties (depending on the city size) minimum. These properties should be strategically scattered around the city. As you begin to earn UPX from hunting, use those earnings to mint/purchase more properties that fill in your network. In the long run, it will decrease the number of sends you need to use while hunting, and also increasing the likelihood of finding sends near your properties. Below you can see Mossijake's property network in Brooklyn. With this type of network, a treasure can typically be found with using only 2 sends.

In October 2022, Upland announced future changes to treasure hunting. One of the expected changes that could impede players with maps like the one below is increased spawn costs. As mentioned above, beyond your free daily treasure spawn additional treasures can be spawned for 50-125 UPX (depending on the city). The proposed change will increase that fee as you spawn more daily treasures. This means that at some point it will likely not make economic sense to continue to treasure hunt after a certain point and that the number of daily sends you have will no longer be the limiting factor. Learn more about all the proposed changes here.

To participate in a Limited Exclusive, or rare treasure hunts, click the treasure button on any property. If a treasure is active you will see a hint. If not, it will say "treasures are recharging". Alternatively you can click the 3 dots at the bottom middle of the screen and choose treasures. From this screen you can see the status of the treasures.

The image below shows that the Limited treasure hunt is still in cool down mode. The countdown clock on the Executive hunt indicates when the hunt will start. As for the Standard hunt, since the daily free one was completed already, you are able to spawn more hunts for 50-125 UPX each (depending on the city). The treasure cool down period for Limited and Exclusive hunts are 15-45 minutes, and 1-3 hours respectively. 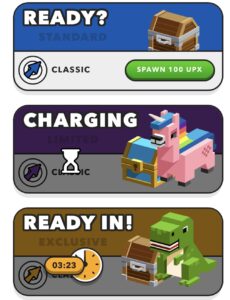 Limited treasure hunts are free to participate in - but you compete against all other players who are also hunting. Once a treasure it found, it goes into a cool down mode where that treasure hunt is unavailable. The player that won the treasure hunt also goes into a cool down mode, where he is unable to participate for that cooldown period (3 hours) in any competitive treasure hunts. A 5 minute countdown is provided prior to beginning the next hunt. The concept and strategy is the same as the standard hunt, but you will have to be faster as there could be dozens of people looking for the same treasure. If a certain thresh hold of players is reached who are hunting, then riot mode is enabled where the prize is doubled! Since you are competing against other players, to win a hunt you likely have to find the treasure within 40 seconds. Having a vast treasure

Exclusive treasures are the same as Limited ones. They spawn less frequently and therefore the rewards you can find are higher. Below you can see the hint is a yellow arrow. This is indicative that it is an Exclusive treasure. Limited treasures are purple and Standard is blue. These color codes take after the collection colors. 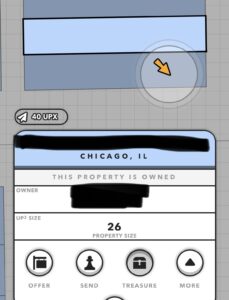 There is a second type of Exclusive treasures that are "stealth" treasures. In order to see the hints for them, you must be less than 1km away from the treasure. Finding this treasure takes a lot of luck. Send yourself between your properties without wasting sends and paying for visits in the hopes that you get close enough to find a hint.

Exclusive and rare treasure hunts are not available in tier 5 cities.  Here is a list of all the cities and their treasure hunting tier.

Rare hunts function like exclusive ones, where the color of the arrow is red. They spawn less frequently, but the payout is higher.

Exclusive and rare treasure hunts are only available in tier 1 cities.  Here is a list of all the cities and their treasure hunting tier.

These hunts are only available  during a few days within spark week.  These treasure chests function like limited treasures, however the payout is always in spark!  Note that riot mode for double payout is not an option for these hunts, even if the number of people hunting passes the thresh hold.

A treasure rush is a competition created around the concept of standard treasure hunting.  In this competition players race against the clock to find as many treasures as possible within 15 minutes.  Players have unlimited sends for these 15 minutes (you still have to pay the visitors fee to any property you land on). After finding a treasure you can spawn a new one for only 10 UPX.  The top 50 players who find the most treasures in the 15 minute timeframe win UPX based on their rankings.  Even if you aren't one of the top ranked players, each treasure you find does have UPX in them.

This competition rotates between cities, so its important to follow Upland's schedule.  A player can only do the treasure hunt once in each city, and the competition is open for 24 hours in each of the scheduled cities.

This treasure hunting for beginners video is another excellent resource to watch. Reading this page will is a great way to get started, but watching someone treasure hunt in action is important for your future success in treasure hunting!

Back to frequently asked questions